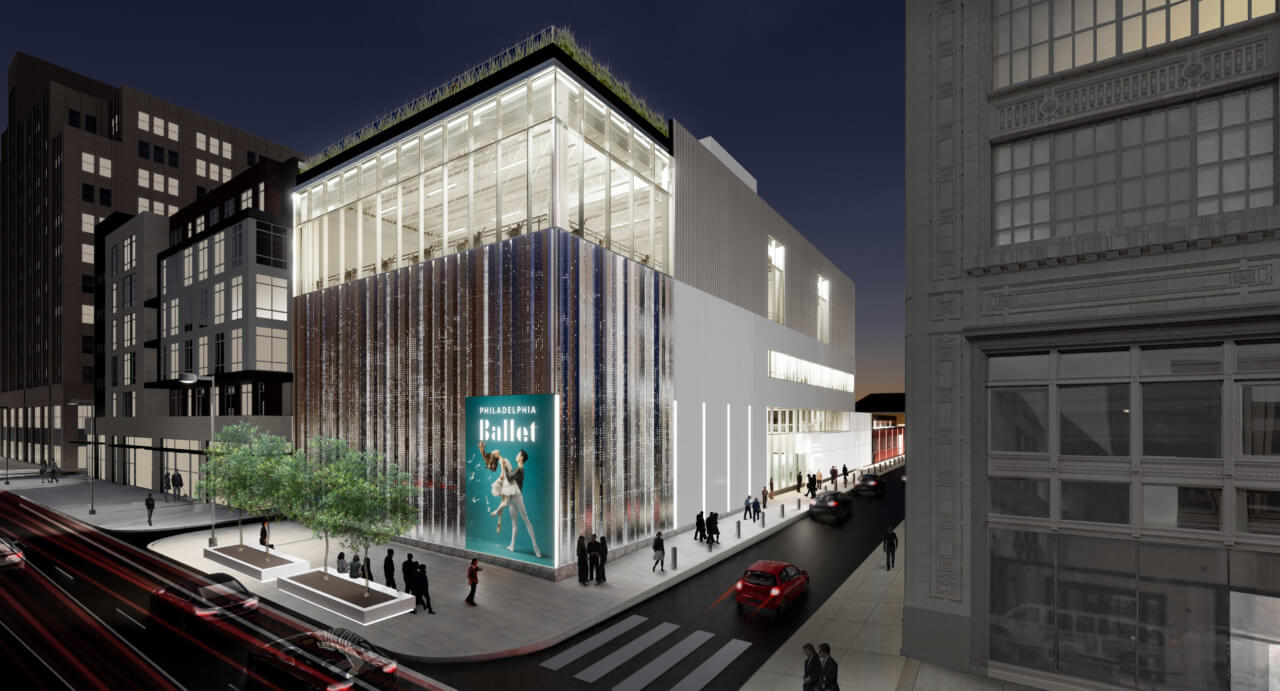 Philadelphia Ballet, the largest ballet company in the Keystone State, has unveiled plans for and announced that it will soon break ground on a major overhaul of its home at the Louise Reed Center for Dance on North Broad Street. The roughly 4-mile North Broad corridor, which originates at Philadelphia City Hall and stretches northward to Germantown Avenue before terminating in Cheltenham Township, is in the midst of an ongoing revitalization; located on the opposite side of the neighborhood-severing Vine Street Expressway from Center City in the once-industrial Callowhill district, Philadelphia Ballet is a relatively new arrival to the corridor, moving into its North Broad Street digs in 2013 from the East Falls neighborhood in the northwest of the city. (The company’s administrative offices, meanwhile, were previously located in South Philly.)

News of the $34 million revamp, which involves both renovating and expanding the organization’s current footprint at 323 North Broad, comes on the heels of another transformative move for the nearly 60-year-old company founded by the late Barbara Weisberger. Just a little over a year ago, the company announced a transformative rebrand, including a name change and new visual identity. From 1963 until July 2021, the organization now known as Philadelphia Ballet was the Pennsylvania Ballet; the name change was meant to reflect the company’s deep ties with its hometown.

“Our company’s evolution into Philadelphia Ballet is not just a cosmetic change. After a year of deep hardship, it is more important than ever that our name reflect the communities we serve and embody the true spirit of our company,” explained Philadelphia Ballet executive director Shelly Power at the time. “Philadelphia is at the core of all that we do.  It is not only our home but also our inspiration, a city that both embraces its rich history and thrives on experimentation.”

As for the Center for Dance expansion project, Power noted in a press statement that “Philadelphia Ballet is a company deeply committed to excellence in our art form, and to engaging with our community through the transformative power of dance. From state-of-the-art rehearsal studios, to added resources for community education and programming, to beautiful, welcoming spaces open to all, this new company home will allow us to expand on those commitments in innumerable ways.”

The enlarged and enhanced Center for Dance is just the first phase of a larger campaign to “foster the continued growth, vitality, and artistry of Philadelphia Ballet.” Additional campaign elements will be announced in the coming months.

As for what new features the Center for Dance will include when complete, the list is an extensive one and includes a full renovation of the company’s current space at the Louise Reed Center for Dance. This will entail upgrades of the existing rehearsal studios, which will be joined by three new studios, to provide “significantly expanded space and resources for both the company and the School of Philadelphia Ballet,” the company explained.

Also on tap are a large-scale “black box rehearsal, performance, and innovation space” that will serve as a venue for community programming and other events while offering “enhanced rehearsal capabilities;” a spacious community gathering space at the building’s main entrance for receptions, community events, educational programming, and more; new offices for the company’s artistic and administrative staff; a dedicated studio space for members of the Philadelphia Ballet Orchestra; a wellness center for dancer treatment and rehabilitation; and, last but not least, a two-story glass walled studio along North Broad that will give passersby a rare, behind-the-scenes glimpse of the company’s artistic process in action.

A groundbreaking for the new Center for Dance will take place late next month with completion slated for the spring of 2024. In the shorter term, it’s never too early to snag tickets to Philadelphia Ballet’s famed annual production of George Balanchine’s The Nutcracker. Performances begin on December 9.