What is the best brand of pointe shoes?

dancechanneltv
Admin
posted on 3 years ago — updated on 5 months ago
44,239
views
Education Polls
These flat-bottomed predecessors of the modern pointe shoe were secured to the feet by ribbons and incorporated pleats under the toes to enable dancers to leap, execute turns, and fully extend their feet. The first dancers to rise up on their toes did so with the help of an invention by Charles Didelot in 1795.

History of ballet pointe shoes started when women began to dance ballet in 1681, twenty years after King Louis XIV of France ordered the founding of the Académie Royale de Danse. Pointe shoes of this period originally had heels. The first non-heeled shoe appeared in the mid-18th century when dancer Marie Camargo of the Paris Opéra Ballet performed leaps that would have been hard in conventional shoes of the age with heels.

After the French Revolution, all standard ballet shoes were without heels. These flat-bottomed shoes represent the predecessors of the modern pointe shoes. They were secured to the feet by ribbons and incorporated pleats under the toes which enabled dancers to leap, execute turns, and fully extend their feet.

In 1795, Charles Didelot created the predecessor of classical pointe shoes. He invented the "flying machine" which enabled lifting dancers upward, allowing them to stand on their toes before leaving the ground. After his invention, many choreographers began to look for ways to incorporate more pointe figures into their pieces.

In the 19th century appeared the desire to dance en pointe without the aid of wires. Marie Taglioni, who first danced La Sylphide en pointe, wore shoes with the soles that were made of leather and the sides and toes that were darned to help the shoes, hold their shapes. However, the shoes of this period were not comfortable, and dancers often rely on the strength of their feet and ankles for support.

In the late 19th century in Italy appeared different form of the pointe shoe. These new model had a sturdy, flat platform at the front end of the shoe in comparison with an earlier model that had sharply pointed toe. Pointe shoes of this period become more silent because they were constructed without nails and the soles were only stiffened at the toes.

The first modern pointe shoes appeared in the early 20th-century when Russian ballerina Anna Pavlova inserted toughened leather soles into her shoes and flattened and hardened the toe area to form a box. In this way, shoes gave extra support to feet.

They are made using turn shoe method where shoes are made inside-out on a last and before finishing turned right-side-out. Lasts can be made to replicate ballerina’s feet.

Ballet dancers have to break in the new ballet pointe shoes to avoid discomfort.

Demi-pointe shoes are very similar to pointe shoes, but they lack hard structure, have no shank, so they are softer. Beginners to pointe technique use them to strengthen feet and ankles.

What are the major pointe shoe brands that you like? 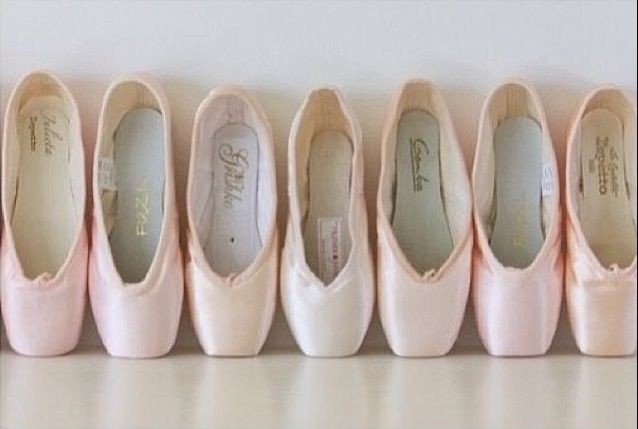