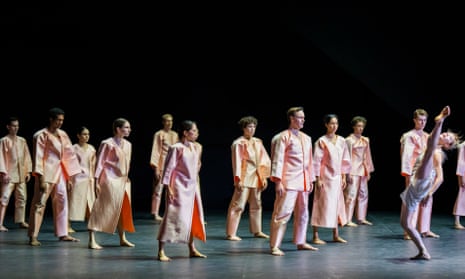 It’s 109 years since the Ballets Russes premiered the Rite of Spring, and the countless versions that have followed over the decades seem to prove that people can’t get enough of ritual sacrifice. At least not when accompanied by Stravinsky’s mighty score. Swedish choreographer Mats Ek made his first Rite back in 1984, but dissatisfied with how it turned out, he’s returned to it nearly 40 years on, creating this world premiere for English National Ballet.

In Ek’s novel take, the sacrifice in question is a woman being given to an arranged marriage. Rather than the wild extremes that Stravinsky provokes in some (think of the flailing hair and bodies of Pina Bausch’s version, previously danced by this company), Ek’s mood is pared back, contained, repressed in emotion, in great contrast to the pounding of the score. Rather than a mob of dancers, we have four characters – mother, father, bride, groom – although when their emotions are heightened it’s done by multiplying the (identically dressed) bodies on stage, rather than increasing the expressiveness of an individual person.

Ek’s style is expansive but spare, in bold shapes like a linocut (those shapes exaggerated by the elegantly boxy, structured costumes, made of pale pink silk and foam). It’s without sentimentality, but that doesn’t mean it can’t be deeply poignant. Most compelling is the duet between bride (Emily Suzuki) and groom (Fernando Carratalá Coloma), a dance full of fear and curiosity, where it feels neither you nor they know where it will end. Suzuki lays herself flat, as if bracing herself, then raises a hand, inviting Coloma. He pulls her up, and lays himself down instead: they are both lost – wondering what is expected of them, or what they want – and gingerly finding each other. The narrative thread is not entirely clear, but it’s a striking treatment of the well-worn score and most definitely worth Ek’s revisit. 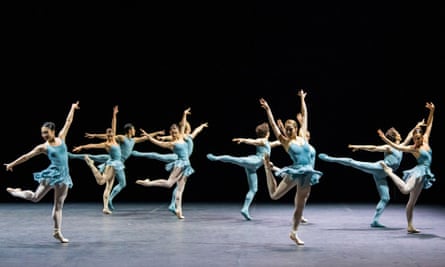 A scene from Blake Works I by William Forsythe for English National Ballet at Sadler’s Wells. Photograph: Tristram Kenton/The Guardian

William Forsythe’s recent pieces are the work of a man with decades of creative experience, able to work with great clarity and certainty, and transfer those qualities on to eager young bodies. Blake Works I (that’s James Blake, the electronic musician) was made originally for Paris Opera Ballet, a company very uniform in training. ENB’s dancers are much more varied in background, but they present a unity of style with flashes of personality. The choreography is just so damn watchable, combining academic steps and fiddly footwork with dancefloor sass. Its speed and intricacy is thrilling – Carratalá Coloma, Erik Woolhouse and Rhys Antoni Yeomans all of note. This piece is full of virtuosity, but unlike how in classical ballet a dancer announces themselves and prepares for a big finish, here the bravura steps come flowing out in deft streams of movement, much in the way dance music is driven by a constant pulse. Blake’s music is underpinned by melancholy and anxiety, but the movement is light and bright – a fascinating combination.

It was always going to be a tall order to be sandwiched between two choreographic masters, but Stina Quagebeur’s Take Five Blues, originally created as a film during lockdown, just about holds its own. It has some of the same casual virtuosity of Forsythe and is also a joyful and faithful response to music, in this case Nigel Kennedy’s free-wheeling takes on Bach and Dave Brubeck, making for a spirited shindig.

At Sadler’s Wells, London, until 12 November