dancechanneltv
Admin
posted on 2 months ago — updated on 1 second ago
194
views
City Ballet continues its 30th anniversary celebration with its 21st Balanchine presentation: 'From Balanchine to Martins: 20th Century Masterworks' 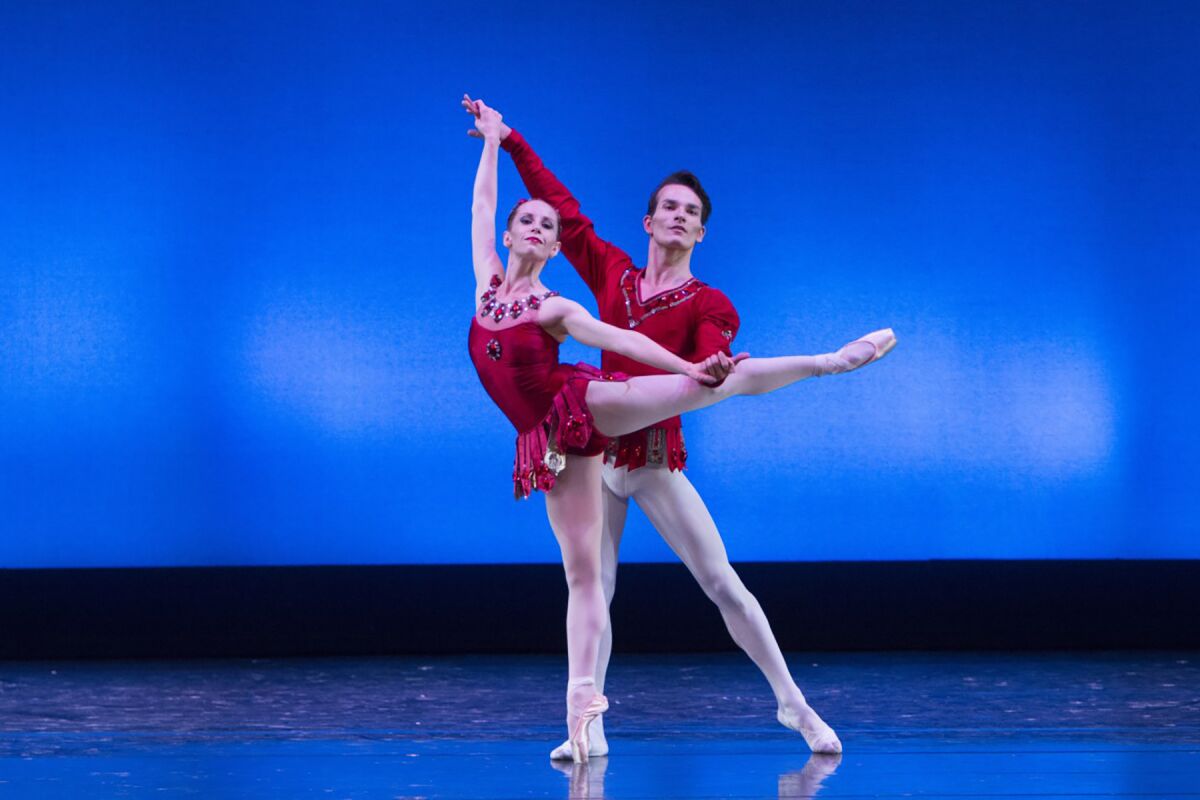 “He created a whole new pathway for choreographers who have followed in his footsteps and works that will endure after we’re long gone,” he said. “When you’re dancing to his choreography, you feel as though it was made for you, that no other steps could be better to the music you’re dancing to.”

City Ballet continues its 30th anniversary celebration with its 21st Balanchine presentation: “From Balanchine to Martins: 20th Century Masterworks” will be performed Nov. 12 and 13 at the Balboa Theatre downtown, then Nov. 17 at the California Center for the Arts, Escondido.

The program features Balanchine’s playful and athletic “Rubies” from his ballet “Jewels,” performed to Igor Stravinsky’s “Capriccio for Piano and Orchestra.” Staging is by George Balanchine Trust repetiteur Zippora Karz, a former soloist ballerina with the New York City Ballet that Balanchine co-founded (with Lincoln Kirstein).

Rounding out the program is “Ash,” choreographed by Peter Martins. “He was the person Balanchine hand-picked to replace him as artistic director (of NYC Ballet) before he passed away,” Wistrich said. “He was a former principal dancer at the time. He was a wonderful choice. Imagine following in the master’s footsteps, but he held his own.

“We’ve only danced this once before and the audiences sat there with their jaws dropped, it was so athletic. It’s very fast. Lots of jumps, lots of inventive turns and partnership. It’s like a speeding train.”

Martins’ son, Nilas, is also a former principal dancer at NYC Ballet and is staging both “Ash,” which is danced to music by Michael Torke, and “Divertimento” for this City Ballet presentation.

Karz was among Balanchine’s last group to be chosen for NYC Ballet’s School of American Ballet and was in the first group taken into the company itself by Peter Martins and Jerome Robbins. She would perform for NYC Ballet for 16 years, from 1983 (the year of Balanchine’s death) through 1999. She became a repetiteur the same year that she retired as a dancer.

“Rubies” is the “ninth or 10th” ballet she has staged for City Ballet, she said.

“I love having relationships with companies because you get to know the directors and the dancers,” Karz said. “It’s very personal. I love working with City Ballet of San Diego. They truly love Balanchine.”

Karz worked with Balanchine during her first years in New York City. “I was blessed,” she said, “to catch the end of his life. To have your life be touched by such genius, and all the great dancers and choreographers he attracted, was a profound experience. You’re never the same.”

Echoing Wistrich’s assessment that George Balanchine “completely revolutionized ballet as we know it,” Karz regards the man born Georgiy Melitonovich Balanchivadze as a visionary and a game-changer.

“Balanchine fell in love with America when he came here (in 1933) from Russia,” she said. “He loved the fast pace of New Yorkers. He loved the uninhibitedness of their movement. He put that in his dances. He wanted everything faster, bigger, more energy. If you are in a Balanchine ballet, every dancer in the ballet dances. Not just the featured ones. Choreographers that have been inspired by Balanchine have also followed suit and allowed the corps de ballet to have as much dancing and focus as the leading dancers.”

“Rubies,” which she is staging for this City Ballet presentation, is an ideal manifestation of what Karz sees as the artistic cohesiveness between Balanchine and Stravinsky.

“They had a way of working with each other where Balanchine perfectly captured Stravinsky’s music. When he (Balanchine) met Stravinsky in the 1920s he was very young. The relationship was a special one. Balanchine famously said, ‘Hear the music, see the dance.’ A Balanchine/Stravinsky ballet like ‘Rubies’ is a perfect example.”

For Karz, “there’s nothing like doing a Stravinsky and Balanchine ballet. You feel like you’re playing on stage, like you are able to explore, expand, let go. You can express part of yourself, the music and choreography. It’s the essence of life and art.”

Wistrich says Karz “loves staging. She’s very passionate about Balanchine’s work and wants to make sure that the audience will see what his vision was. She’s very meticulous and a wonderful person to work with.”

Karz, who is diabetic, is also author of the memoir cleverly titled “The Sugarless Plum” and the children’s book “Ballerina Dreams.” She has lived her own ballerina dream and is now helping others fulfill theirs.

Coddon is a freelance writer.