Can Fashion Reference Ballet in a Way That's Respectful? - Fashionista

dancechanneltv
Admin
posted on 2 months ago — updated on 1 second ago
188
views
"So many fashion designers and ambassadors of pop culture, they love ballet as a concept, but they won't actually buy a ticket to a ballet."
Sep 20, 2022

When a preview of the debut shoe by Sandy Liang — a designer I've always been a fan of and whose NYFW show I was excited to attend — hit my inbox, I immediately felt that tinge of jaded aversion, despite her Mary Jane Pointe being an objectively adorable item, fitting in perfectly within the brand's ouvre of serotonin-boosting wares. But where was my serotonin? Two colleagues who are also fellow former ballerinas shared that they felt a similar way.

While I still love and respect ballet as an art form, my relationship to it is complicated, my memories from that time ranging from pure joy to severe pain, both physical and emotional. If I can pinpoint a moment when the struggle of ballet started to outweigh the fun for me (and probably a lot of former dancers), it was around the age of 12 or 13, when we were allowed to go en pointe. (Before that, the bones in the feet aren't fully developed and pointe work is more likely to cause permanent damage.) It's an exciting time — I still remember the thrill of my first pointe shoe fitting — that's also shrouded in pain and confusion.

This is all to say that, like many sports, ballet is really, really hard in ways that people who haven't done it at a certain level would have no way of knowing (despite how accurate movies like "Center Stage" and "Black Swan" actually were). In fact, the marker of a great ballet dancer is an ability to make it all look easy. Ballet also has a problematic reputation for exclusivity, its doors more easily opened by those with money, privilege, white skin and a very specific body type. No wonder fashion people love it.

Fashion has been sourcing inspiration from ballet forever: In the 2000s, John Galliano and Jean Paul Gaultier created iconic gowns in homage to Edgar Degas; the New York City Ballet pairs its choreographers with big-name designers to collaborate on costumes annually; and ballet has seemingly always been a popular theme for fashion editorials, campaigns and videos. Lately, ballet has been bubbling up pretty frequently in fashion, from Rodarte's celebrity-filled Fall 2022 campaign and Miu Miu's satin ballet flats dominating fashion-week street style, to Liang's latest collection and the ballet slipper-esque shoes and tulle skirts Simone Rocha just sent down the runway in London. Not to mention the rise of the "balletcore" aesthetic via TikTok.

Cuteness aside, actual dancers often take issue with the way they're represented in these instances — especially when a model with little to no dance experience is directed to pose as a ballerina. The most famous example is Kendall Jenner doing so with disastrously bad technique for Vogue España in 2016, drawing the ire of many dancers, including Abbey Lee Miller of "Dance Moms" and Dance Spirit magazine.

"Vogue Spain just posted a video featuring Kendall Jenner — and it is very, very facepalm-y," the magazine wrote in a blog post at the time. "Why? Because they decided to dress Jenner up in tutus and legwarmers and have her 'do ballet,' though she's clearly not ballet trained...the video is, apparently, a sort of little-girl fantasy on ballerina-ness. Which, OK. But to our eyes, the whole thing reads as pretty disrespectful to the artists who devote their lives to this demanding craft."

Over the years, videos by Free People, Vanity Fair (c/o Petra Collins) and Love drew similar criticism from the dance community. To the general public, I'm not sure if this criticism comes off as elitist or condescending or silly, but I get it. As a ballet student, perfect technique is drilled into you so intensely, so repetitively, that when you see Kendall Jenner do...whatever she does in that video, you're brain is wired to cringe in horror — even if it's been a decade since your last ballet class.

"I've always thought ballet dancers were so beautiful. My parents never put me in ballet, even though I begged them to, but I remember I got a pink satin pair of slippers from Macy's and I would pretend that those were my ballet slippers," she said. "I was obsessed with pointe shoes because I couldn't, as a kid, understand how they got on their tippy toe and I would draw them all the time."

A few years ago, Isabella Boylston, a principal dancer at American Ballet Theatre (who posts off-duty outfits on Instagram almost as much as her dancing), reached out to Liang to invite her to one of her shows; afterwards, Boylston gave her the signed pair of pointe shoes pictured above.

"That's when I was like, wait, what if we made a Mary Jane with a true pointe toe, with the structure, and it really does look like that." She let me touch the pair she was wearing and, thankfully, Liang's version is softer and more comfortable than a real pointe shoe, but otherwise built very similarly.

Ultimately, getting the shoe right was a challenging two-year process for which Liang actually sent manufacturers a real pointe shoe to reference. "I really wanted them to get it right and to make it beautiful," she said. "I worked with two factories before I finally settled on this one and I was just so new to the game. I didn't have, like, a shoe person from the get go help me. But I'm really happy with how they turned out."

So are a lot of people, it seems. Within days of launching, the $495 Mary Jane Pointes sold out of all sizes and colorways. A rep for the brand confirmed it will restock them in two-to-three months and there will be a pre-order "in the coming weeks." Plus, the brand's future shoe launches will likely see the pointe shape done in new silhouettes.

"They're kind of like a forever shoe to me," said Liang. "I feel like I'm gonna always keep the pointe and I want to just own that and express it in different ways." In other words, ballet isn't just a trend for Liang, trendy as it may be right now. 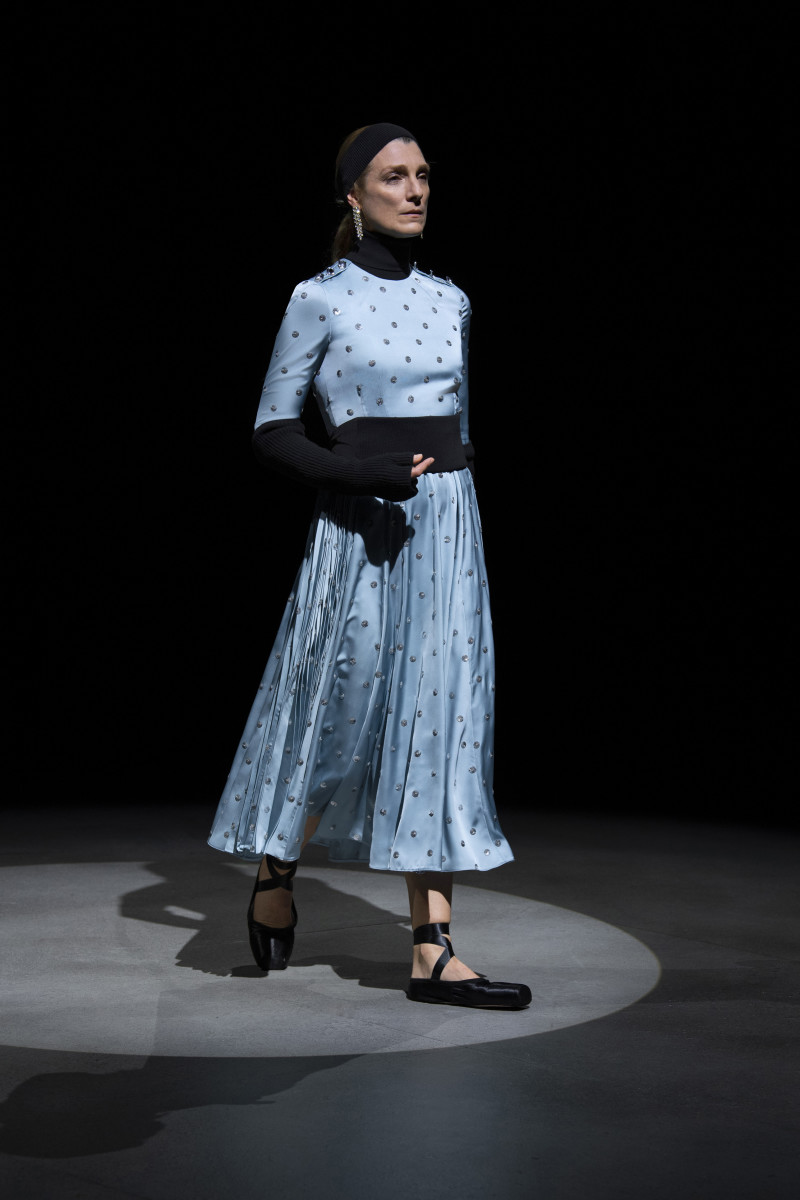 "I feel like ballet is just one of those things that's always going to be beautiful and timeless, and I'd rather respect it as a beautiful thing," she said. "It can be trendy and of-the-moment or whatever, but it's never gonna lose its luster for me."

But how does an actual professional ballet dancer feel about the moment ballet is once again having in fashion?

"I feel like so many fashion designers and ambassadors of pop culture, they love ballet as a concept, but they won't actually buy a ticket to a ballet. And I feel like Sandy has actually taken the time to come to shows and get to know a little bit about my art form," Boylston shared backstage after Liang's show.

"What I get annoyed by more than anything is when brands hire non-dancers to sort of 'do ballet,' and there's so many incredible dancers out there. So I would just say: Do your research; hire actual ballet dancers." 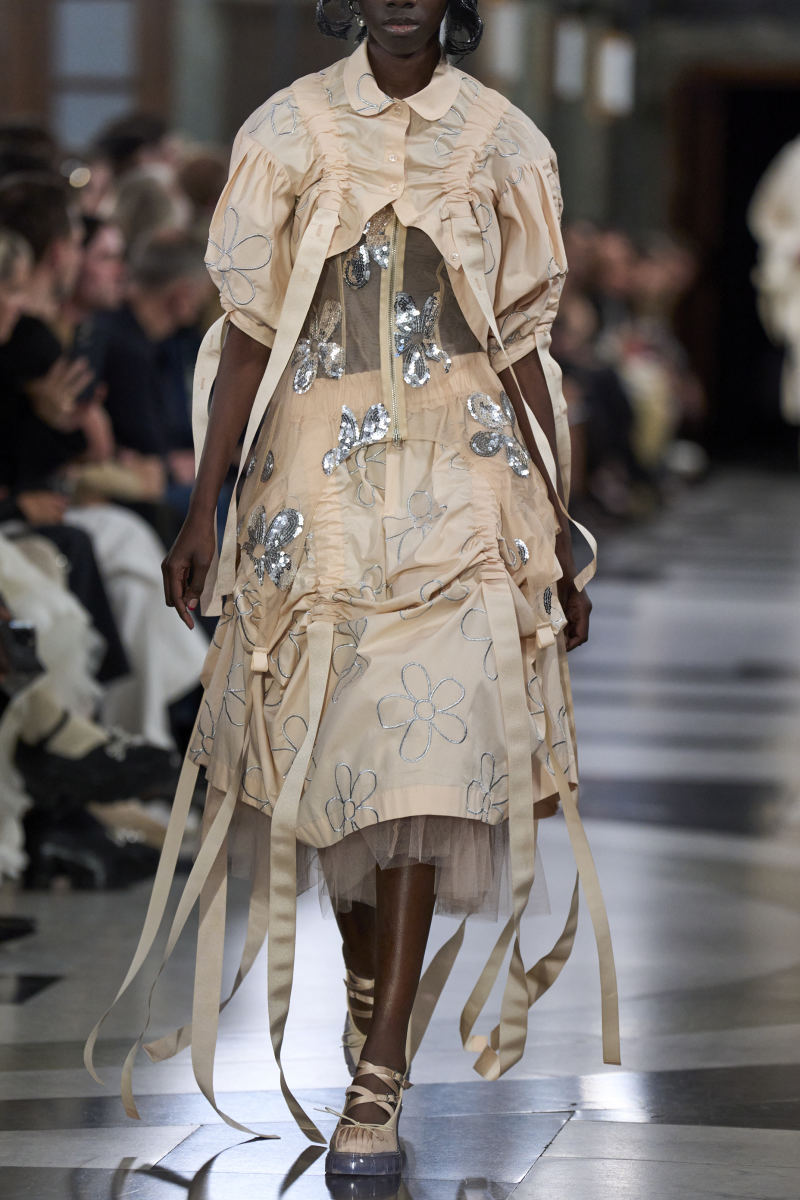 As with all instances of appropriation, cultural or otherwise, there's the question of whether money from goods being sold is going back to the community being referenced. Appropriating ballet aesthetics is of course hardly comparable to appropriating the culture of, say, a historically oppressed people. However, like most performing arts, dance companies aren't exactly thriving in the wake of COVID-19. The New York City Ballet's annual Fall Fashion Gala, scheduled for Sept. 28, will be one forthcoming opportunity to fashion to help give back. Beyond that, Boylston has a message:

"I love that people are inspired by ballet and I think it has almost this mystique about it, but I would just encourage people, if they're in any way interested in it, just buy a ticket. Go to the show."