Birmingham Royal Ballet: Into the Music; Made in Leeds: Three Short Ballets – review - The Guardian

dancechanneltv
Admin
posted on 2 months ago — updated on 1 second ago
184
views
Inspired by Munch paintings and infused with hip-hop, two invigorating triple bills by Royal Ballet alumni are a riot of styles and contemporary staging 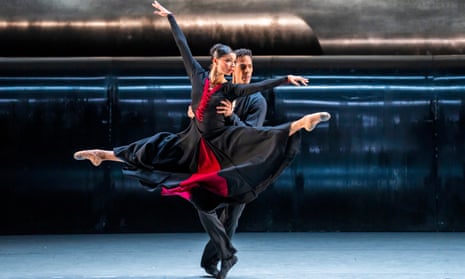 Two triple bills last week offered a fascinating opportunity to see two Royal Ballet alumni in action as company directors. Carlos Acosta has been in charge of Birmingham Royal Ballet for more than two years, Federico Bonelli in post at Northern Ballet for just six months. Both are engaged in reshaping the image of their troupes to suit our times.

Acosta, further down the road despite the pandemic, which ground a lot of his ambitious plans to a halt, has found one answer to what his company does: it performs to large-scale live music. The presence in the pit of the Royal Ballet Sinfonia, conducted by Thomas Jung and Koen Kessels, was a constant inspiration as it whisked through invigorating accounts of Britten’s Sinfonia (for Forgotten Land) and Beethoven for The Seventh Symphony, plus Mikael Karlsson’s bluesy and blowsy score for Hotel.

The second part of his equation comes from the dancers. Birmingham’s dancers, always an attractive and strongly individuated bunch, look as good and sharp as they have done for years, attacking each piece with relish and skill. The pieces themselves are a tour through choreographic styles and yet they look comfortable in each of them.

Jiří Kylián’s Forgotten Land, inspired by Munch paintings, has dramatic designs and costumes in rich reds and pinks by John Macfarlane and great sweeping lifts as it traverses the moods of the Britten score from sad to angry to accepting. Made in 1981, it’s surprisingly packed with steps, filling the music with busy action. Céline Gittens and Tyrone Singleton make a huge impact but all the dancers mine the expressiveness of the piece with confidence.

The movement is consistently interesting, punchy and spiky, and the shifts in focus from close-up to long-shot genuinely intriguing

Uwe Scholz is, even more than Kylián, a choreographer much admired on the continent – where Acosta danced in one of his works – but not much performed here. The Seventh Symphony is one of those large-scale neoclassical, near-Balanchine works that sets massed ranks of dancers skittering across the stage. Some of the moves are ugly – men hauling women in the splits like sacks of potatoes – but most are inventive and the company shine, with Gittens and Yaoqian Shang particularly dazzling.

In between comes Hotel, a piece so contemporary it hurts. Made by choreographer Morgann Runacre-Temple and film-maker Jessica Wright, with a clever monochrome setting by Linbury prize winner Sami Fendall, it’s a dystopian vision of a hotel as prison, mixing film both live and projected with the dance to create a clever and surreal space where anything can happen. The movement is consistently interesting, punchy and spiky, and the shifts in focus from close-up to long-shot genuinely intriguing. 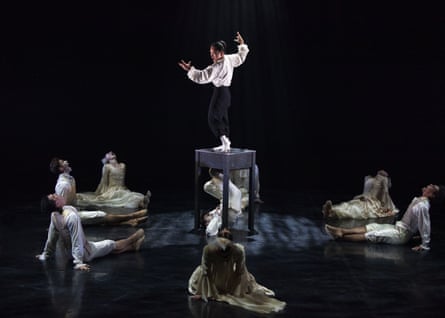 I haven’t a clue what it all means, but you can sense the liberation in the dancers as they explore its odd unfolding.

There’s that same sense of enjoyment in Northern Ballet’s Made in Leeds, overseen by Bonelli but commissioned by his predecessor, David Nixon, particularly in Dickson Mbi’s Ma Vie, which pairs their balletic training with the hip-hop expertise of guest dancer Jonadette Carpio to propulsive, improvisatory effect.

In Mthuthuzeli November’s emotional Wailers the dancers are also pushed well beyond their comfort zone, in a piece that mixes pointe shoes and bells, ballet and weighted, South African-inflected gestures. Stina Quagebeur’s Nostalgia seems the most conventional piece on the bill, yet it is full of deep feeling and an unusual modernity in the way it examines a recognisable contemporary relationship that is hitting the rocks, exploring the sense of opportunities lost by using a mirror chorus of dancers to represent happier times.

The music (by Jeremy Birchall) perhaps overextends its impact, but at its best it has a clarity of emotion and a sweep of choreography that is entrancing. It is also beautifully danced, particularly by Minju Kang and Jonathan Hanks as the unhappy couple and Rachael Gillespie and Gavin McCaig as their nostalgic counterpart.

Star ratings (out of five)
Into the Music ★★★★
Made in Leeds: Three Short Ballets ★★★